Riverdale: Cheryl channels her inner Arrow, and we get a Black Hood reveal! (S02:E21) 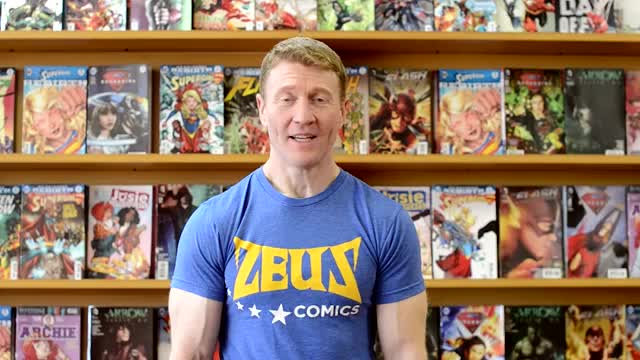 Hello Riverdale Class of 2018! It's Richard from Zeus Comics

Nonchalantly leave your teen boyfriends bed after his dad walks in, stop your limo driver to catch a gunman or gunwoman as it were, discover your Dad is going to expose your mom's affair with your teen boyfriends dad and survive a mobster attack in which your mom shoots and kills a man named small fry - and that was just Veronica Lodges day! Why it must be a bonkers episode of Riverdale!!!

Alright so Cheryl Blossom thwarting last episodes cliffhanger of the Black Hood at her door by dawning a red hooded cloak and archerying his ass then returning later in the episode with said cloak and bow to aid Jughead's rescue of Toni was everything. Recap - over.

This episode was all over the place in a good way! Where do I even start! Let's kick is off with last episode cliffhanger part one! It's a riot as Fangs Fogarty while being released from Riverdale jail is shot and rushed to the hospital. But with Archie having wrestled gun totting Reggie the ground we were left wondering if Reggie fired the gun. Nope! It was Midge Klump's mom! Since the town assumed Fangs killed Midge, Mrs Klump took it upon herself to exact judgement on Fangs. That doesn't stop the town from rioting with the serpent’s anger over Fangs trashing Riverdale High.

All this chaos is exactly what Hiram Lodge wants! He paid Reggie and the Dark Circle to start the chaos, the new sheriff Minetta appears to be on Hiram's payroll aaaaand if that not enough he sends Hermione down to the Riverdale Register to offer a $1 million bounty for the capture of the Black Hood. Hiram hopes he can pin the chaos on the Black Hood then regain control of the town with aid of his bought sheriff Minetta.

And just when Archie and Jughead have made amends when it's revealed Reggie didn't fire the gun - the serpents main enemy the Ghoulies return to Pop's to smash cars adding more to the madness. But it's Fred Andrews and returning Sherriff Keller with the rescue driving the Ghoulies away.

But the Ghoulies didn't come without friends specifically Penny Peabody who wants control of the southside for her drug operation - and on her side Hiram Lodge?! We don't hear their actual conversation but Hiram's involvement with Penny tells me there might be more to Hiram than a for profit prison in Riverdale.

But how much does Hermione know? It must be a lot because she has that large glass of wine in her hand nearly every scene. And after the break in by Papa Poutine's son Small Fry where he kills Andre and then Hermione the shoots Small Fry dead I was like gimmie some of that good wine Hermione I'm gonna pull up a chair too

Concerned the million dollar bounty Hermione placed for the Black Hood's capture is hers, Veronica breaks into Hiram's desk to find a file marked “October Surprise" but it wasn't a surprise to Hermione. Remember back in season one when Hermione and Fred Andrews were carrying on before that had even cast Hiram Lodge for the show, Hiram has all that mapped out as a plan to get Hermione elected. The Lodge's gambit is that she'll survive the bad publicity but family man Fred Andrew wholesome image won't

Oh my gosh golly - I dropped the lead. Hal Cooper is the Black Hood! Or one of them at least! After wounding the Black Hood, Cheryl calls Betty to warn her. Upon her return home Betty discovers blood and bloody towels around the kitchen sink... because Hal's not even hiding it anymore.

FP looking for Jughead calls Betty more concerned about Jughead then the fact that Betty's Hal dad was admitted to the hospital badly bleeding. That might be important to her FP. At the hospital Betty heads to room 221 to discover the murdered body of the Doctor Masters. Then a call! It’s coming from inside the hospital room… It's the Black Hood demanding Betty head home

Once there Hal puts on a creepy home movie of tiny Hal being brainwashed by his off-camera mom. Hal reveals that Grandpappy Cooper took the name Cooper after murdering his Blossom brother and not the other way around. And OG Black Hood suspect Joseph's dad was blackmailing Grandpappy Cooper resulting in Grandpappy murdering the entire Conway clan... except young Joseph. Grandmommi Cooper programs young Hal that sinners have to die and the Conways are sinners. Twisting young Hal... Now keep in mind the conversation is being recorded so when Hal asks Betty who he is, the Black Hood and who he killed Ms Grundy, Midge and Doctor Masters. It's Betty who's admitting it on tape not Hal... Ah! What we do get Hal confirming he was not the Black Hood shooter at town hall.

This may be important because at the same moment at the Andrews - Archie and Fred are attacked by a man in a black hood. With Hal as the Black Hood ending with Hal being hauled off by the police I’m not convince he’s gone forever

The preview also gives us a glimpse of the Riverdale teens at a gravestone, but one teen is missing and absent from the preview. When Penny and the Ghoulies ask for a showdown with the Serpents for control of the Southside at dawn, Jughead rushes to Penny to stop her only endangering himself. And Penny gets her pound of flesh back cutting off Judhead's serpent tattoo.

But is would-be hero FP too late? Our episode ends with FP emerging from the woods with what appears to be Jughead's body. Our season two concludes next episode and one of the Riverdale kids may already be dead!

New mysteries and a funeral? Its the season two of finale of Riverdale, "Brave New World!"